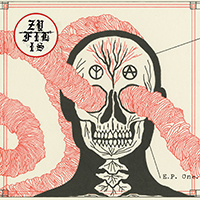 Seven blasts of skull-cleaving käng punk attack. Powerful Swedish d-beat hardcore with really intricate bass work - if you're familiar with 90's Portalnd rippers Detestation, this is along that line of thought - it punches along at a more mid-tempo clip, but still is really enticing. These tracks originally appeared on a split tape with Muro.