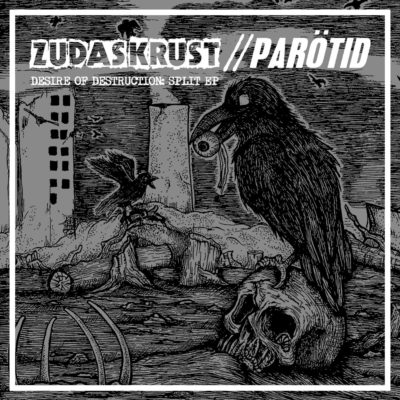 A big cooperative release to bring two of the finest southeast Asian raw punk bands across the oceans and onto your turntable.

Zudas Krust has been distorting Indonesia for over a decade now with their insane noise raw d-beat style. They've got a big discography, tons of tapes, and splits with cool bands like Life (Japan) and Geiger Counter (USA). But on this release, they leave one foot in the urgency of d-beat hardcore and add one foot in the morose brutality of metal, for a brutal crustcore style that's instantly fulfilling and timeless. Three tracks with heavy riffing, recklessly evil solos, tight playing, but with all the attitude and intensity you remember from your Doom records.

I was hearing hype about Parotid before I even heard any of their recordings. Two guys from smaller town Malaysia that have been taking their country by storm with constant gigging and a flurry of demo tapes. They play a raw and loose d-beat hardcore, pre-requisite reverb on the vocals, but they go the Zyanose route of just bass and drums, and take advantage of that with some interesting twists and dynamics beyond the average d-beat band. Three tracks to wreck your hearing.

Get on this shit and start to dive into two of the most exciting punk scenes in the world.