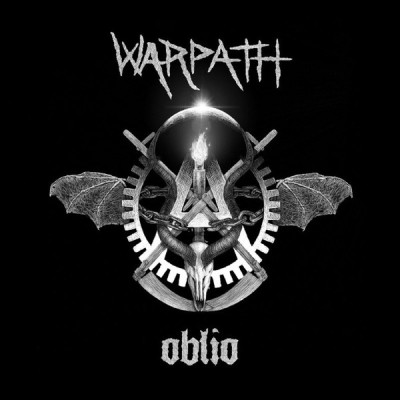 There are a few punk, death metal and thrash bands called Warpath. This is the crusty punk influenced Warpath based in Milan, Italy. After the breakup of the bands Land of Devastation, Trauma, Attacco alle Menti and Disprogress some ex-members started Warpath who have played noisily in the squat community of Milan since 2009 with various lineups. Since then they have delivered a sound of an industrial city, fused by Doom, Hiatus and crusty DIY squat punk. With dual vocals, Marta and Martina deliver, one a guttural growl and the other the higher vocal. When I say higher vocal, I mean it is like the vocal chords are ready to rip. Before I say another thing about the band it has to be said chunky thick vinyl wins hands down for me. It will always mean that ‘Oblio’ will last years of multitude plays.
The album opens with a strong opener of heavy pummeling drums and old-school crust riffs in the vein of Doom mixed with Disrupt. Take a breath, then at instantaneous speed we are thrust straight into “Smetto Quando Voglio”, which has that fast punch that takes no prisoners. Warpath stick to their guns with their influences but have a taste of new heavy elements within their sound also. Next song I want to mention is the track ‘Bombardati Dalla Merda’ as to me it could sit nicely on Extreme Noise Terror’s ‘Phonophobia’ lp, it has that similar guitar echoing shriek reverberating between riffs towards the end too. Certainly a real stand out song on the album. Their music is sombre and melancholic without slowing down or being melodic. This is a straight up crust punk record, full of political criticism. So I like most people enjoy reading the lyrics while listening to the music. Singing in English and Italian they speak of peoples misinterpretations of squatters, media whitewash, nihilism and the feeling of hopelessness that can hang over us.
There are 300 copies of the album on vinyl from the band for €10. Or you can download the album for free at their bandcamp. Like all the best albums it has been released with the help of friends that gave them some money as individuals and the labels/distros Propaganda Sovversiva, Distrozione, Gustosissimo, Heresy Rex, Dog From Hell, Akaip and Peretta-Core, Senza Sonno Libere Autoproduzioni.