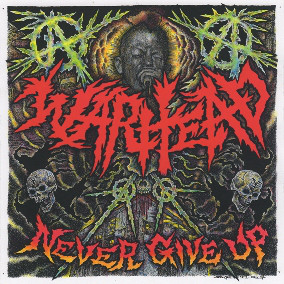 Never Give Up (LP)

WARHEAD come from the former capital of the Empire, Kyoto, and there's no doubt they're among the top classic hard core bands from the Land of the Rising Sun. Insane Society now releases the most important of their 1991-2004 work on one LP wrapped in a cover by well-known japcore artist Sugi - 22 songs from their out-of-print and hard-to-find 7", split and compillation releases, boasting remastered sound (as heard on a CD previously released by Blood Sucker Records). The first song, "Cry of the Truth", is a solid punch in the face right off and this maelstrom of the most frantic hardcorepunk won't let you go until the needle has come to the last groove of the record. Maniac vocals mixed with massive sung-along refrains, guitars in the red, roaring bass, rabid drumming and cymbals sounding like a whiplash - all this makes for an incredibly loud and energetic mix, supported by lyrics full of defiance and desire to never conform and to never give up! Phil Hell