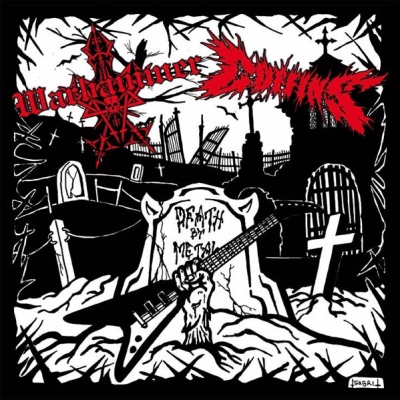 It's time to merge two great realities of the darkest and truest music in "today"'s underground, so we present a 10” Split EP between WARHAMMER and COFFINS.
Teutonic WARHAMMER play in a maniac way the ultra-cult Hellhammer/Celtic Frost style since ages, as no-one could do better.
Growing up from both metal & punk roots, the Warhammer deathdoom brigade "evolved" their style in a darker and more obsessed version of the swiss gods, offering here an over 7 minutes song that won't betray their tradition in playing obscure music!
On the other side Japanese COFFINS are back on vinyl with their amazing stenchous 'n' doomish death by metal that distinguished them from a myriad of many other groups of similar genre nowadays.
This release is limited to 666 copies, 150 on coloured/different cover for maniacs, which are 11 €.