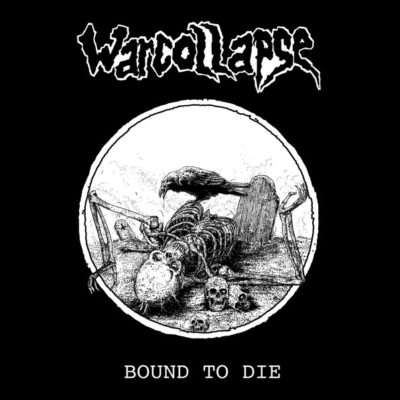 Bound to Die is the latest EP from this long-running Swedish crust institution. While Warcollapse is a name I’ve known for many years (I often think about their memorably titled first album from 1995, Crust as Fuck Existence), I can’t recall hearing them. On one hand, they sound like I would have expected: heavy, Doom-style metallic crust with high production values and an emphasis on heavy low-end frequencies. However, while there’s plenty of fist-in-air, grooved-out banana riff action, there’s a lot going on in these four tracks to keep your ear interested. I love the rhythmic quirks in the chorus to the first track, “Manipulerad,” and the guitar leads are rocked out and drenched in wah-wah. My ear gravitates toward bands with a looser sound, but it’s hard to deny Warcollapse’s power when they lock into a groove, particularly on the memorable mid-paced parts. Maybe this sound would get tiring on a long 12”, but these four tracks are a long way from wearing out their welcome.