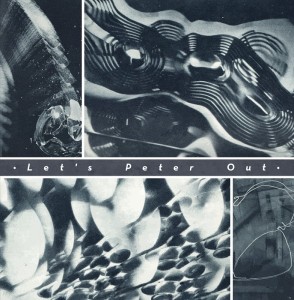 The new compilation LP “Let’s Peter Out” was released on the 16th of May on white vinyl including a download code, and it’s limited to 500 copies. The bands are: Cemetery, Cosmetics, The Flatfield, The Harrow, Hemgraven, Komplikations, Low Sea, Metro Cult, Monument, Moth, Sally Dige, Veil of Light & XTR Human.
The tracks from Moth, Monument, Cemetery, the Harrow and Metro Cult are exclusive to this compilation. Released for the first time on vinyl are the tracks by Cosmetics, Veil of Light, Hemgraven and Low Sea.