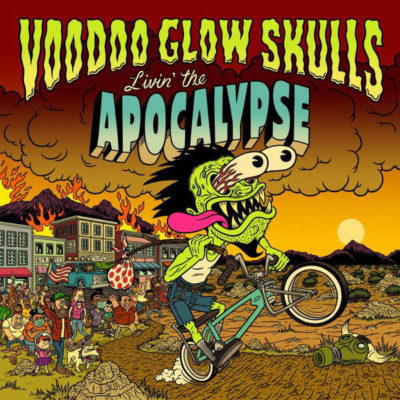 BACK IN STOCK!!! A lot has happened in the world and with Voodoo Glow Skulls since the release of their last full-length in 2012. When it comes to Voodoo, the biggest change was the departure of the band’s original lead singer in 2017. Sure, it’s a big deal when any band loses a lead singer, but when the lead singer is also related to the other founding members of the band, it just hits different. I don’t think anyone would have blamed Voodoo Glow Skulls if they called it quits after that, but they persevered. Death by Stereo lead singer Efrem Schulz answered the call, and the band never missed a beat. Up until this point, the band hasn’t released any new music. They’ve been playing the classics and hits live. Now, with Livin’ the Apocalypse, fans finally get to hear what this new-look Voodoo Glow Skulls can do.

To put it bluntly, I’m happy to report this album absolutely rips.

Sure, the raspy vocal style of Frank Casillas is missing with the switch to Efrem, but that shock is over by the time “Make America Skank Again” ends. In fact, Efrem’s experience with Death By Stereo lends itself really well to the ska core flavor of Voodoo Glow Skulls. He really does complement the traditional “Voodoo” sound extremely well. Vocally, things sounds a bit more “metal,” but the energy is off the charts. Schulz also has a great voice that compels you to listen to what he’s singing – and to sing along when you learn the words.

If you’re an older fan of the band, and have some apprehension about Livin’ the Apocalypse, you’re really worrying for no reason. Personally, I’ve been a fan of the band for almost 25 years now. My first date with my now wife was a Goldfinger / Voodoo Glow Skulls show. They’re a band that is very important to me for many reasons. I wanted this album to be good and was so nervous that it just wouldn’t work.

After listening to it for at least a half dozen times, I can confidently say this album is Voodoo’s best album since Band Geek Mafia.

There’s an energy and excitement to the music on this album that hasn’t been heard in a while. Livin’ the Apocalypse sounds like a classic Voodoo Glow Skulls album, and it makes me so happy. The vibe is completely different, and it seems like they’re having fun again. It’s weird to think that losing Frank and gaining Efrem might have been the best thing to happen to Voodoo Glow Skulls, but that’s where my head is right now.

Lyrically, the album touches on a lot of issues we’ve seen bubble up in the last few years. It’s their most political album to date, which also might even make it their most important. VGS has never been one to shy away from issues, but with Livin’ the Apocalypse, they’re not pulling any punches. The title track, for instance, focuses solely on the pandemic, being trapped inside, and the civil unrest that occurred in the summer of 2020. It also features a blood-curdling scream right in the middle of the song.

Politics doesn’t stop there. Along with killer horn lines, “Rise Up” features a positive message of doing what’s right and making a difference. At times, that song reminds me of what H2O might sound like if they put out a ska song. “Generation Genocide” focuses on how we’ve never gotten better as a society. We’re still a world filled with hatred, bigotry, and fear. Voodoo’s familiar humor blends with some of their political messages as well. “The Karen Song” has the levity of a song like “Fat Randy,” while discussing their issues with “Karen.”

Speaking of Randy, we even get an unexpected guest vocal from Randy Blythe from Lamb of God on “The Walking Dread,” and it is epic. That song really shows just how talented the band is. It literally sounds like it would fit right in on a Lamb of God album just as easily as it does on a ska album.

If I have to Live the Apocalypse, I want to do it with Voodoo Glow Skulls

Livin’ the Apocalypse is chock full of that signature Voodoo sound. It immediately feels like hanging out with an old friend, even with the new singer and more direct political content. There’s also a lot more ska than a typical Voodoo Glow Skulls release too. Eric and Jose are given several moments to shine on sax and trombone, and they knock it out of the park each and every time. This is also an album that just continues to get better each and every time you listen to it.

Even while feeling familiar, Jorge and Eddie move the band forward with their arrangements this go round. Livin’ the Apocalypse serves as an exclamation point on the next phase of the band. As a fan, I’m excited about what comes next.