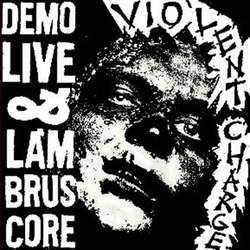 VIOLENT CHARGE was a hardcore band formed in the fall of 1985 to the end of 1987 in Poviglio, Italy.
They released a limited 8 track demo in 1986, all other recordings were live in the studio.
The LP has the full 1st demo and other studio recordings that have never been released - 23 tracks total with one RAW POWER cover song.
This is a limited pressing of 500 copies.