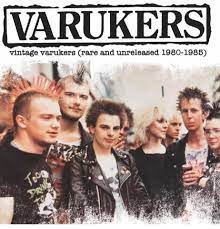 BACK IN STOCK!!! Retrospective on these UK82-sound prime movers, spanning their early days and containing their 1980 demo tape, their hard to find 1984 'No Hope For A Future' 7" originally out on the German Pogar Records label, tracks from the "We Don't Want Your Fucking War" and "We Don't Need Nuclear Force" compilation, outtakes from their first 'Bloodsuckers' LP's recording session, and four live tracks from an incendiary live set at the Working Man's Club in Besham, July 28th 1986. A plethora of rare tracks covering their 1980-1985 period, presented here on a limited edition vinyl together with unpublished early photos kindly provided by the band and complete with a 60x60 cm poster!