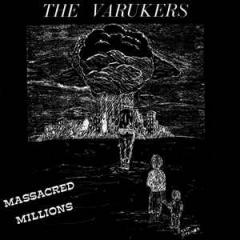 BACK IN STOCK!!! Originally released as a 12” ep in 1983, this is raw and savage hardcore in the Discharge tradition. From the alienation and misery of Thatcher’s Britain came the revolt of punk against the establishment, society, and the weak posing of the sold out remnants of first wave of punk. Taking punk to it’s most logical extreme, Varukers channeled the angst of the era into these four tracks of hardcore power.