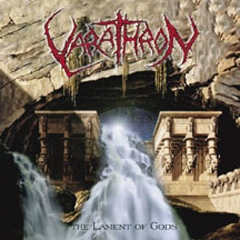 The Lament Of Gods (LP)

Lament of the Gods is, as I’ve previously suggested, a bit of a departure for the band. This is definitely more obviously melodic and keyboards play a very central role here. It’s still certainly Hellenic black metal - as you can tell by the fantastic melancholic riffs - but it’s definitely more mellow in its own peculiar way. There’s a yearning quality to the material here and it’s really quite addictive. If you’re looking where to place this on the metal spectrum, well, I’ll be succinct and just say that this is probably closer to October Tide than it is to Darkthrone. It’s worth noting that the keyboards definitely play a big part here. ‘The World Through Ancient Eyes’, for instance, has a very eerie cyclic keyboard refrain (riff?) at its heart. I know that by 1999 black metal was certainly no stranger to keyboards but this is quite something. It’s very gothic sounding and it reminds me of ‘silent’ cinema soundtracks ala Nosferatu in a strange way. I guess it’s worth noting that black metal isn’t really a stranger to horror either. The tone of the keyboards and their centrality is actually quite similar to - wait for it - Virgin Steele! Yes, I don’t know as to whether there is a direct Defeisian here influence but given that I’m a chap who likes to, er, stay Invictus I can’t help but notice this particular closeness. Yet, never fear, despite the stylistic shift displayed here there’s still always lots of great riffs. That said, my favourite track, ‘Beyond the Grave’, is driven by, firstly, a cool acoustic guitar motif and then another of those great cyclic keyboard lines. It’s weirdly anthemic. But I guess that’s rather appropriate for its strange subject matter. It’s about, as you’ve probably guessed, death but its perspective is, once again, very different. One can wonder precisely what that ‘secret enjoyment is beyond the grave’ is? But a quick scan of the lyrics does reveal it to be a solace found in death and not any actual post-mortem fumbling. Ah well, coffins aren’t usually big enough for two. There’s a Mercyful Fate cover, too, it’s placed at the EP’s end so not to break its flow. It’s actually a really great cover, though. Musically, it’s not too far removed from rest of the songs here, as it’s been cleverly re-worked. But, of course, the wicked, tongue-in-cheek malefic streak is just too noticeable. I think everyone knows what C.U.N.T stands for but Mr Necroabyssious makes it just that little bit clearer to everyone by shouting it out in a typically enthusiastic manner. The guitar solo has been replaced by this fantastically kooky keyboard solo, too. A nice touch as although Varathron are great riff-writers their soloing skills probably wouldn’t stand up to Michael Denner’s (it’s not their fault, though, as he is one of the best soloists I’ve ever heard). Basically, this is an ideal EP for me. It’s fresh and quite adventurous (which is something that the format lends itself well to). If you’re into black metal that strays of the beaten path: your Mortuary Drapes, Sabbats, Master’s Hammers and such then I can certainly recommend this to you. It’s mostly quite melancholic but with a strangely uplifting feel to it. A strange celebration of unexpected pain, indeed!