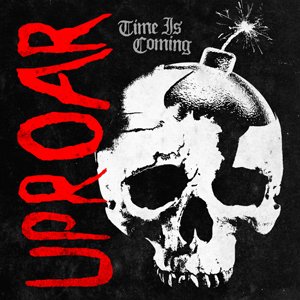 Three unreleased songs from 1982. For fans of: Skeptix, Varukers or Discharge. Mastered by Tom Lyle of Government Issue, Uproar will tour Australia in February and the U.S. this summer. All original members but one.

UPROAR, a small town punk band that made an impact on the UK82 scene, despite not playing larger cities, signed to Beat the System Records in 1982, and were featured on the Total Anarchy compilation alongside label mates One Way System and External Menace. With politically charged lyrics and intense energy, UPROAR toured as opening support for The Exploited in 1985, and appeared on various cassette compilations put together by Conflict in the mid 1980’s.

UPROAR also appeared in the book “Burning Britain: The History of UK Punk 1980–1984” by Ian Glasper.

After reforming with three original members in 2007, UPROAR played the legendary Rebellion Festival in 2008 and 2017, alongside Cock Sparrer, Discharge, and many others.