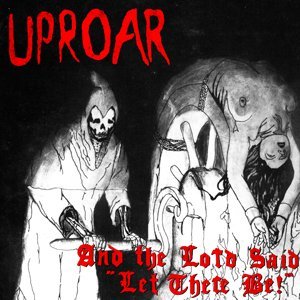 For the first time since 1983, official reissue of this classic UK'82 style punk release. Remastered to sound fuckin ripping! “And the Lord Said Let There Be!” is UPROAR’s first full length release, clocking in at just under an hour, and was originally released on Beat the System Records in 1983. This rerelease on Dr. Strange Records, remastered by Tom Lyle (Government Issue) contains updated cover art and two color vinyl variants. UPROAR releases are highly sought after, due to their initial limited distribution. “And the Lord Said Let There Be!” is a must-have for any UK82 collector.
UPROAR also appeared in the book “Burning Britain: The History of UK Punk 1980–1984” by Ian Glasper.