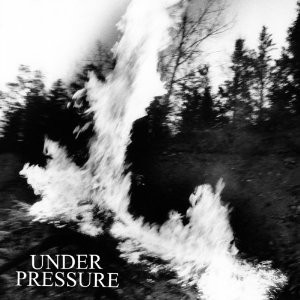 In the hardcore/metal world, both listeners and musicians alike often get caught up in the search for something faster, heavier, and more punishing. It's no surprise, as these styles of music originated from a desire to push the envelope, but sometimes it's nice to take a step back from the ongoing brutality competition and just take in the joys of a solid, unassuming hardcore record. And that's exactly where Winnipeg's Under Pressure comes into the picture. Come Clean is gritty, but not unlistenable, fast, but not breakneck, and engaging, but not confusing. If something that resembles a mix between Black Flag and Fucked Up sounds like it might be up your alley, then Under Pressure's brand of honest hardcore could be a perfect fit.

Come Clean's opening title track kicks off the disc with an up-tempo number, melodic due to its catchy chord progression and abrasive due to the throaty style of vocalist Cam Popham. And while this track is a good representation of Under Pressure's straightforward musical formula, there are plenty of variations to prevent the disc from growing tedious. "Safety" picks up the pace with a bit of forceful drumming, while the CD's longest track, "Muddy Water" sticks to a mid-tempo groove provided by a driving bass part and some memorable guitar leads. The guitar tone is quite similar to that heard on Fucked Up's Hidden World, and its semi-clean sound stands apart in a hardcore world currently full of maximum distortion. There are a few missteps, such as the relatively unnecessary piano intro in "The Crawl," but when it comes down to it, Come Clean is just a rock solid slab of hardcore. Those seeking extremely innovative ideas and approaches might be disappointed with the band's no-frills approach, but hey, that's their problem.

But perhaps the best part of Come Clean lies in Popham's lyrical style. There are no tales of political troubles, no direct commentary on the hardcore scene, and no obvious lyrical agenda. Instead of these hardcore norms, Popham focuses on personal struggles, and his honest lyrics just drip with frustration. Lyrics rarely make or break a record for me, but I find the silent anger of excerpts like the following to be something in which many can relate:

"So I face the day, I take my pulse / Feeling just okay is what I hate the most / I stand up straight, I hit my stride / Feeling opaque, I retreat inside / It's all I know and I won't grow / Lest some vague ambition show / It's what I see when I'm staring at the bottom / And the bottom is staring back at me."

It may not be showy or overly poetic, but Popham's ability to convey thoughts in an honest manner is a nice touch on a record that excels by sticking to the basics of well-written, straightforward hardcore.

Bottom Line: There aren't too many major surprises on Under Pressure's Come Clean, but memorable songwriting and honest lyrics make for an enjoyable listen. Fans of Black Flag and Fucked Up should check these guys out.