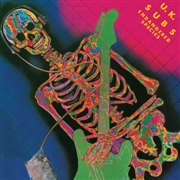 BACK IN STOCK!!! Originally released in 1982, the U.K. Subs fourth studio album is considered by many of the band's fans their finest moments, and there's many reasons why it could very well be: the record's powerful sound (courtesy of the production of the Subs own Nicky Garratt) made justice to a band on top of their game, recording some of the best songs of their career.