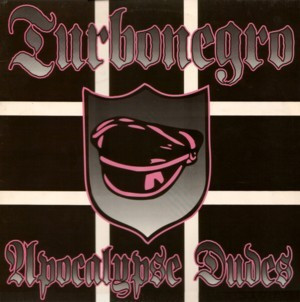 BACK IN STOCK!!! Apocalypse Dudes is the fourth album by the Norwegian band Turbonegro. It is the first studio album with Euroboy as the lead guitarist and the last before the band disbanded in December 1998. Released in early 1998 in Norway and Germany, the album was a huge success for the then underground band.
Adapting a more glam-rock oriented sound, Apocalypse Dudes set the standard for future Turbonegro records and became the first part of the Apocalypse trilogy, consisting of Apocalypse Dudes (1998), Scandinavian Leather (2003) and Party Animals (2005).