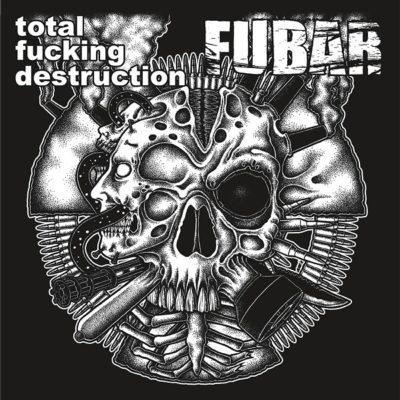 TOTAL FUCKING DESTRUCTION are really hard to pin down as one specific sound, or even to put a specific genre on them. They combine many forms of metal / hardcore / punk with tempo changes, howling vocals, guttural vocals, and straight forward blasting. Even with the blasting they still manage to tie in some radical guitar tones and harmonies! Even putting in a track, that stands out in originality and will have you thinking that ‘Bugs’ are actually crawling all over you! FUBAR strand out as a blasting onslaught of old school and furious grindcore! They do a fantastic job channeling the classics and will continue to appeal to fans of Napalm Death, and Phobia. They are really at the forefront of the new dawn of grind, while still paying homage to the classics. Furious, blasting and angry energy round there tracks out.