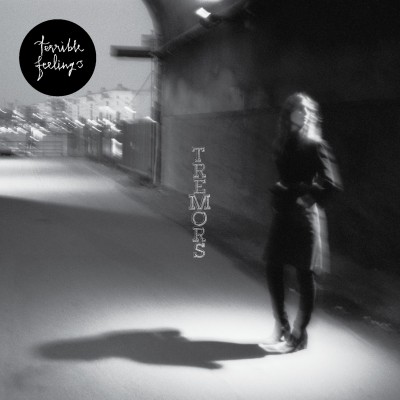 BACK IN STOCK!!! Terrible Feelings – Manuela, Anton, and Andy – from Malmö, Sweden have existed since 2009. Like so many others before them, the band sprung out of late parties, drunken philosophical discussions, punk rock, power pop, and friendship.
To date, the band has released four 7”s and one full length album. They've embarked on several full European tours and two US tours (one on each coast), and have played such far and wide locations as Fun Fun Fun Fest in Austin, to almost every squat in Germany. They've shared stages with bands such as The Raveonettes, Imperial State Electric, Fucked Up, Jeff the Brotherhood, White Lung, and The Babies; and were handpicked by none other than Refused as support in both Europe and Sweden on their final tour.

Musically Terrible Feelings has been described as proto punk, dark power pop and gloomy surf, with a tint of both country and 70s hard rock. All descriptions are correct. It's rock 'n' roll.

April 2015 will see the dawn of "Tremors", the band’s second full length. Recorded by Joakim from MF/MB/, mastered by Linus from Element (GOAT, etc), and with stunning artwork by Robert Hurula. Released by Sabotage Records in Europe and Deranged Records in North America.

The band has managed to plow through 4 bass players and are currently employing their 5th, joining them on their European tour in April 2015 supporting Modern Life Is War. Plans for US tours are in the gears. They even bought a synthesiser to play all the organ:y parts live. The band sounds better than ever and is ready for their second coming.