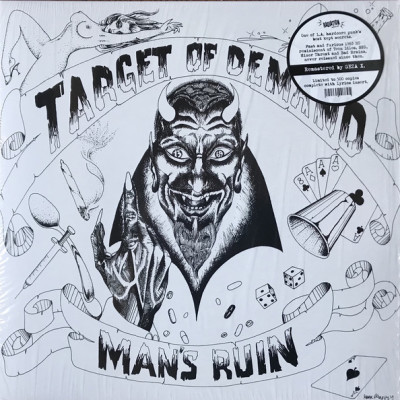 BACK IN STOCK!!! One of the best kept secrets of 80's California Hardcore Punk, TARGET OF DEMAND hailed from Long Beach and only released this 10-track smasher on the small Happy Hermit label and a couple compilation tracks before disbanding. Due to their very short existence as a band, and the fact that they were much more influenced by Teen Idles or SS Decontrol and the sounds coming out of Boston and the Midwest, rather than what was going on in California at the time, this incredibly ripping U.S. hardcore mayhem hasn’t been reissued until today.
Remastered by California punk legend GEZA X, from the original analog tapes, this is 100% pure American hardcore from 1983. RIYL: Black Flag, Poison Idea, Minor Threat, early Suicidal Tendencies. Limited edition of 500 copies, 100 on ORANGE/WHITE splatter vinyl, with original artwork and double sided lyrics insert.