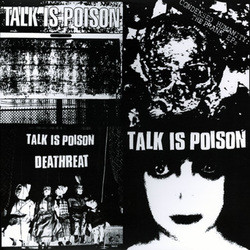 At last. A fairly short-lived, late '90s hardcore band, Talk is Poison seemed to stick in the heads of connoisseurs after disbanding, leaving behind a small but dedicated cadre of fans. They produced three records - two EPs and a split with Deathreat - and after many laments about this material going out of print, it's nice to see all of it collected here. But does it hold up, almost a decade later?

Sort of. Talk is Poison play a bleak strain of modern hardcore descended from Citizens Arrest, much like partners in crime Deathreat, with a bass-driven moodiness that recalls Econochrist. The songs storm by in a hail of strained vocals and ashen power chord gloom, with minor-key bass bits bubbling up out of the mix. All of it sounds appropriately devastating, with a powerful recording that enhances the songs without sacrificing their rough edges.

One thing puzzles me about this reissue; it chops up the order of the songs. The first half of the Straight to Hell EP opens side one, and the second half opens side two, with the Deathreat split and Control EP following respectively. You can ignore this unless you're a purist, but it creates an interesting if illusory effect: the second side sounds like it could be later material, as the songs have a bit more intricacy and nuance.

And I hate to say it, because these are solid, satisfying hardcore records, but the songwriting leaves something to be desired. Justly notable moments aside (a grim bass joust during the outro of "Data-Void", some guitar creep on "Draw Blood", semi-anthemic choruses on "Isolation" and "Lost", etc.), a lot of this material blurs. That's not especially unusual, and many won't really care, but it all feels a bit generic at times, and it pales in the face of its influences.

The lyrics don't really help on that front either. They supply the requisite disgust and contempt, pointing angry fingers at the ominous "they" whose endless greed only hastens society's collapse. All the usual targets (the military-industrial complex, justice system, etc.) get indicted, and technology's nefarious side effects held up to scrutiny. Perhaps not surprisingly, a heavy His Hero is Gone vibe runs through all of it, complete with a song valorizing the right to suicide a la "Confessions of a Suicide Advocate" from Tragedy's first LP, released just as this band shut down.

Don't get me wrong; none of this is bad in any moral sense, and I'm familiar with the stock response - bands keep singing about these issues because they continue to harm us all. But it all sounds a bit too rote for me to grant it classic status. And part of me feels guilty, since there are so many hardcore bands today that fail to convey an ounce of the intensity that Talk is Poison does. Still, caveat emptor.

All nitpicks aside, this is a terrific and long-awaited reissue by the always-reliable Prank Records, and I have no doubt that many punk rock consumers will be delighted to see it on shelves. Now if someone would just get around to reissuing those Citizens Arrest recordsÃ¢â¬Â¦again.