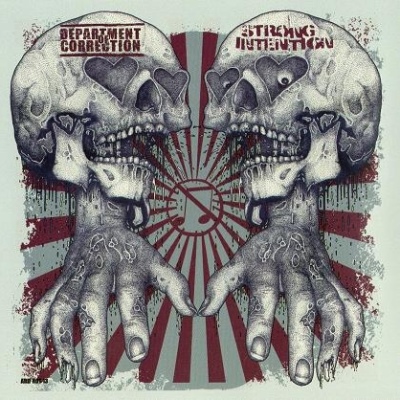 Genre-splitting at its finest!!!
Maryland bands never fall short on extremity.
Since the mid-'90s STRONG INTENTION have been punishing the underground with their own blend of New York-influenced hardcore breakdowns and blistering grindcore attacks.
They recorded 13 new tracks early this year by Steve Austin @ Austin Compound Boston, MA with help from Derek Engemann of CATTLE DECAPITATION who did Bass and backing vocals and Sparky Volyes (ex-Dying Fetus and Misery Index) on lead guitar. Jason Netherton of MISERY INDEX did some guests vocals.
DEPARTMENT OF CORRECTION: This grind is Energy. This grind is Rage. A big wall of sound of the finest in brutality. A big punch in your mouth that makes your heart go BOOM !
Influenced a bit by Brutal Truth, Napalm Death, Kill the Client, 13 songs of French, frenzy and sexy schizo-grindcore that cook the groove with testosterone.