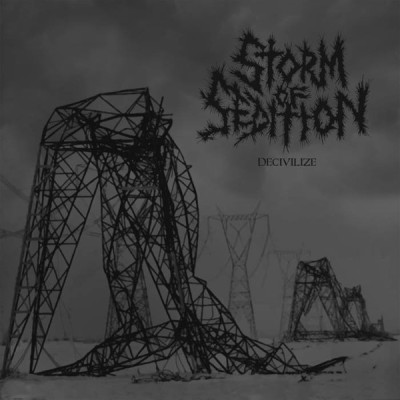 Are you prepared to brave the storm?...
Brace yourself for one of the most uncompromising hard hitting and politically outspoken records of this era. STORM OF SEDITION are an anti-civilization anarchist crust punk band based out of Victoria BC. Sharing members with the mighty ISKRA you can definitely expect some serious blackened crust, and yes a huge metal influence is prevalent however STORM OF SEDITION are a bit more reminiscent of bands like CONTRAVENE & NAUSEA. “Decivilize” brings a heavy anarcho punk dynamic to the table combined with over the top blackened crust grind thats littered with blistering solo’s, insanely powerful drumbeats, and thought productive lyrics that challenge our current state of human civilization. All in all this is an absolute monster of a release! Comes with a 12 page booklet containing lyrics, notes, and song explanations.