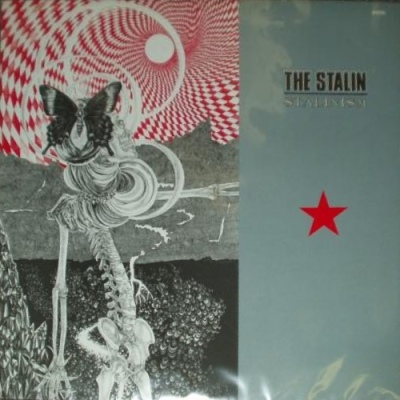 BACK IN STOCK!!! One of the most seminal Japanese punk bands ever, Stalin formed in 1980 and blew away all previous attempts at Japanese punk thanks to their frontman Michiro Endo's crazy on-stage perfomances and their unique style.
Even though by the release of their first LP "Trash" in 1981 Stalin moved towards a more 'hardcore/punk' direction, which resulted in what's known to be their best work - the classic "Stop Jap" LP from 1982, Stalin's early singles are one of the best examples of what would be 15 years later defined as "Killed By Death" punk rock. Originally released in 1987, the 'Stalinism' LP collected their first flexi 7", the 'Stalinism' EP, the 'Fish Inn' flexi single, along with 'Chicken Farm' their contribution to the legendary international hardcore compilation 'Welcome to 1984', to whom Stalin owe a good portion of their cult status. A great reissue for all Japanese punk fans out there.