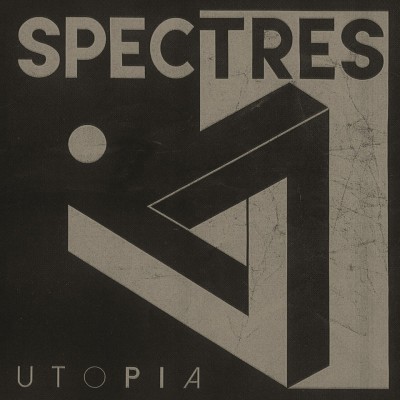 BACK IN STOCK!!! Vancouver, British Columbia’s Spectres are set to release their long awaited third full length LP, Utopia, this Spring (2016). The North American release will be on Deranged, while the European release will happen thanks to Sabotage Records on March 18 (On that date the Spectres will also be playing live at a special CVLT Nation event with Sad Lovers and Giants here). Utopia is an 8-song offering of gloomy and compelling gothy postpunk that shows the five piece evolving further along the road to more complex melodies, guitar lines, and singer Brian Gustavson pushing his vocals into higher ranges, adding a more dynamic cast to the overall song selections here. Put bluntly, Utopia is a magical postpunk masterpiece: while the Spectres’ earliest EPs and songs had a gritty Warsaw/Crisis feel, Utopia is a lush and shimmering document of doomy greatness, one of the crowning albums of the current postpunk and deathrock revival. It’s more firmly in the ballpark of bands like The Sound or the early 4AD “lush” postpunk bands of the early 1980s than the band’s earlier material.