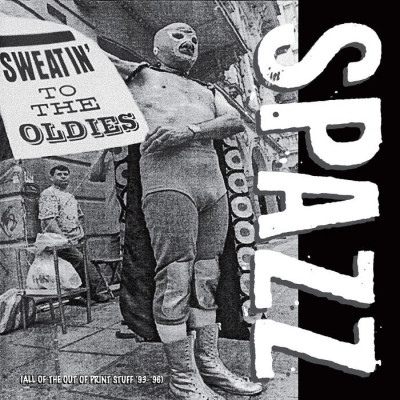 Sweatin' To The Oldies (Double LP)

64 tracks from 1993-1996 compiled from splits with Charles Bronson, Brutal Truth, Rupture, Floor and more plus the debut EP, tracks from a bunch of comps including “Better Read Than Dead” and live at KFJC and 924 Gilman St.
credits. Everything remastered, or in some cases mastered for the first time by Dan Randall at Mammoth Sound. Originally released on Slap A Ham Records in 1997 and out of print for 15 years. Sweatin to the oldies is a must have for fans of the powerviolence/hardcore genre. This has it all, with lots of hard to find tracks and a collection of alot of their old split eps. Spazz has done to powerviolence what Suffocation did for deathmetal. Basically they pretty much set the precedent for talent and brutality in the hardcore/grindcore/powerviolence scene. There are a few live tracks as well. Spazz is the undisputed king of hilarious lyrics, which deliver humor as well as hate. Overall, an excellent album which lets you hear a diverse range of music from the kings of powerviolence!!!