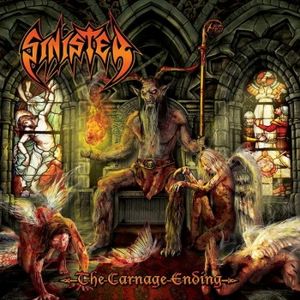 Having emerged on the scene when death metal was at its peak at the beginning of the nineties, Sinister has, apart from a short hiatus, steadily released a stream of straight-up death metal releases for more than twenty years. I lapped up their early releases which purveyed the quintessential death-grind sound that was becoming so big at the time. However I drifted away from much of the death metal scene as, like many, the darker mystique of black metal grabbed most of my attention. Therefore I missed a lot of releases, but occasionally I like to search for some new death metal that still retains that old sound. And that is pretty much what I found with The Carnage Ending. Although retaining only one original member, it still feels like much the same band I remember, albeit with a more contemporary edge, particularly in terms of execution and production. Both are top notch. Everything is clear and well-defined in the mix, which really brings the flawless execution of all instruments to the fore.