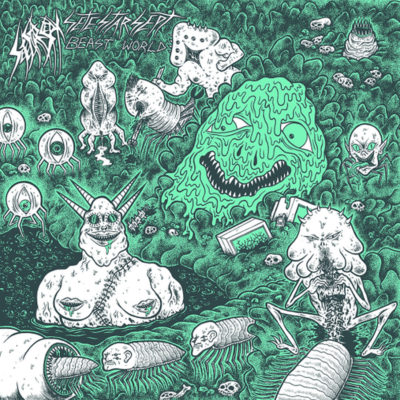 For the last 12 years, Sete Star Sept has been one of the most exciting grind bands ever. From a constant worldwide touring schedule taking them from USA and Europe to Brazil and Australia to Cambodia and Nepal, to an expansive discography showing an ever mutating style of grindcore-cum-noisecore, Sete Star Sept never ceases to be on the front of our minds. I never thought I'd see the day where a noisecore band was going to help bring about world peace, but here we are.

After 3 years of splits and 12" EPs, the refinement towards "the most shit band" continues with a new proper full-length album. Recorded here in Baltimore with Mike Walls (SPHC noise scientist), Beast World LP is doubtless one of the best entries in Sete Star Sept's discography and one of the best grind records in some years.

A-side features 23 songs in 11 minutes so you know it's awesome. Insane grindcore/noisecore that bursts at the seams with energy and aggression. Nonstop blasts, all go and no slow. A raw and noisy sound adds to the chaos but the crystal clear Mike Walls mixing-style allows the madness to go down rather smoothly.

B-side is a special treat, similar to the B-side of their last LP Visceral Tavern. Shit noisecore of the highest order, executed in a manner only seen at a select few live performances around the world. I won't spoil the surprise, but long-time fans will be pleased.

Art and layout by the esteemed Rudolfo de Silva.