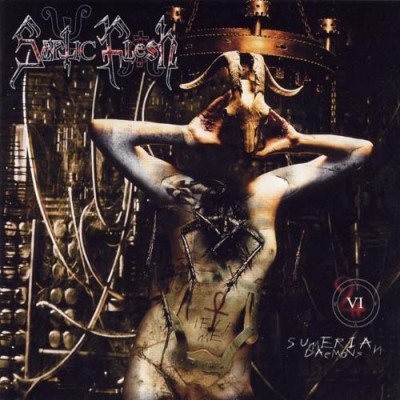 SepticFlesh really pull something remarkable off on this release, typically what impresses me about metal is almost always the instruments / drums guitar bass ect always shine the highest, while I may like the vocal aspects of the band they are rarely crucial to the enjoyment of the album. Here we have something different a truly operatic yet heavy bordering on brutal release from Septic Flesh, Sumerian Demons is a crucial metal release for all metal fans and here is why. The drumming on this album can be fast as hell, although its not really the drum speed that’s so impressive, its how easily the drums morph to the mood of the song and change along with it. The Drummer remains tasteful to the music that’s portrayed. Never does the album turn into a Fill fest or drums simply for the sake of showing off, and this is a good thing. The guitars evolve through out the song and even throughout the album, at times being very low and brutal sounding other times they have a Swedish melodeath quality to them, and melody here is the key to the album. The vocals really take you away; the strong deathly “wraith like” sorrowful vocals really do a lot for this album. The strong Male vocals intertwine perfectly with female operatic sounding vocals, and that serves to wrap around each other however these vocals don’t overlap, instead often used as a foreground background type of motif. The bass has a rich grindy sound that’s evident and really shines through on songs like “Magic Loves Infinity”. The bass plays along more to the drums then the guitar making it more fun to listen to. The flow of this album is interesting adding to the unique ness, sort of an on again off again melody vs brutality kind of thing pulled off really well. This makes the album not feel like a chore to listen to, something bands like nile, hate eternal, or so many others often fail to pull off on their recent releases. The creativity and uniqueness aside SepticFlesh pulled off a heavy fast album that simply is awesome to listen to. Something you wont stop listing to any time soon. Best way I can describe this album is its just “tasty” leaves you wanting more. This is the kind of album I could listen to making me want to pop in some FleshGod Apocalpse, interesting that I read they will be touring together. Like the wine to a great steak, this album kicks my ass time and again.