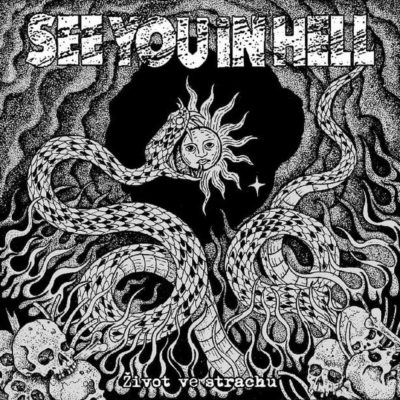 SEE YOU IN HELL

It took 7 years but brand new See You In Hell album is here. Fast and straight hardcore / punk.

Established in May 1999, See You In Hell is a longstanding and powerful hardcore punk band from the Czech town of Brno that has given so much to the DIY punk scene in their place.

This is also the band that was graced with the shredding guitars and boundless enthusiasm of Filip Fuchs. The founding member and amazing guitarist of See You In Hell, who passed away on January 9, 2016.

Fast forward to 2019, See You In Hell are ready with their new LP called “Život ve strachu” (Life in fear). Eight offerings of tightly played, dark hardcore punk blend with ripping thrash to keep your head hopping all throughout. The Japanese “burning spirits” influences of the previous recordings are kinda put aside here in favour of more straight-forward European hardcore sound. However, these new tracks boast an even tougher and more metallic sound compared to their previous releases.

A major whirlwind of anger and despair, this is an essential listening for anyone interested in the contemporary Czech crust and hardcore punk scene.