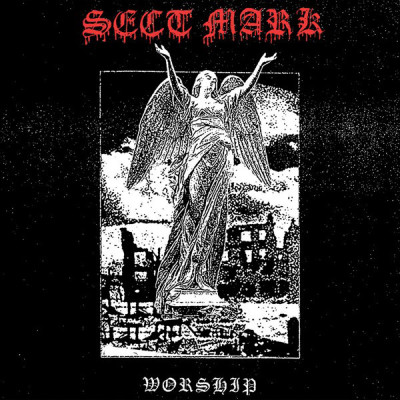 Ladies and gentlemen, Agipunk proudly announce we'll be the official European distributors of this excellent product released by the American label Iron Lung Records. Sect Mark hail from Rome and represent the new breed of maniacal Italian hardcore. Short, drippy, seething and nasty as hell. The fuzz fucked intro of last song, side A ("Scouts" -ed.) had me shermed up and ready to bust through a brick wall. As a whole 'Worship' brings to mind a broken pugilist pissing in an exhaust stained fountain and then fighting the cops with knuckles full of busted teeth. Not sure why, but that is the image this music evokes. It's ugly, nihilistic and mean. I like that. I hate everything else. For fans of S.H.I.T., Deformity and Warthog.
Here are a bunch of reviews that'll make your juices flow:
Collective Zine
That kind of shattered, obliterative hardcore where the only respite comes when something ruptures and the band doubles up in pain. The vocals are a jabbering nightmare, and the music a circular saw to the groin. S.H.I.T. are an obvious point of reference, as are those Discos Enfermos bands that I have uniformly compared to S.H.I.T. It's incessant. Absolutely incessant! Oh, and exhausting. Absolutely exhausting!

Dead Air at the Pulpit
Sect Mark is a four piece band from Rome, Italy who formed in 2016, from the looks of things. Sect Mark play a dirty and noise damaged style of hardcore. Musically, Sect Mark can be loosely compared to bands such as Hoax, The Lowest Form, Gag, Rash, and other like-minded bands. Since forming in 2016, Sect Mark have released a self-titled demo in November of 2017. Worship is the band's latest EP, which was released via Iron Lung records on January 26th, 2018. On Worship, Sect Mark offer up eight tracks of raw, filthy, and ugly sounding hardcore/punk. Overall, Worship makes for an amazing listen and definitely should not be missed. Highly recommended! Enjoy!

Noisey USA
Sect Mark's Hardcore is About as Raw as Punk Can Get. Listen to a track from the Italian band's upcoming EP on the esteemed Iron Lung label.
Listening to Sect Mark’s nasty demo felt like being shoved into a high school locker and then kicked off a flight of stairs. Now, the Rome hardcore band are due to deliver Worship, a follow up EP of bruising and raw punk on the esteemed US label Iron Lung.
The track “Attempts” is up now on the Iron Lung Bandcamp page and continues the four-piece's paranoid and schized hardcore. Over hectic guitar, vocalist Johnny P. spews a tirade that brings to mind current UK bands such as The Lowest Form and Permission.
Like the demo, the artwork is by Francesco Goats and once again captures the darkness that weighs heavily on the music.

Diy Conspiracy
Last year, I reviewed Sect Mark’s demo tape and was damn affected by their sound. Holy shit, they’re just so raw and spiteful.
There’s not really a lot to uncover here besides the Italian band’s ripping brand of misanthropic punk. On Worship, Sect Mark is blazing forth with eight new tracks—a blistering attack against your both eardrums and all senses.
It’s ruthlessly violent music, draped in filth and ugliness. You can’t just pick the songs apart and talk about any kind of musicianship as the record itself is more like a statement. All tracks just fuse together in a blur of screeching riffs, crude drumming, and a caustic anger in the echo-demolished vocals. On Worship, there is a visceral surge of hopelessness. You’re struck on the path to wreck your room and your life…
Worship was released on cult sludgy powerviolence band Iron Lung’s own record label, and that alone should tell you something.

Six Noises – Ear Drilling Fun (NZ)
Worship is the debut MLP from Italian raw punks Sect Mark. Worship is being released by US label Iron Lung Records, and the list of formidable punk releases that Iron Lung Records has unleashed upon the world is a mile fucking long. Sect Mark's neck-wrecking debut is no different. Worship is an ugly blast of nihilistic noise, and Sect Mark deliver ultra-abrasive (i.e. wall-of-noise) hardcore throughout. Worshipdoesn't feature one iota of sophistication. But that's no bad thing. It's all that primitive audio violence that makes Worship so great in the first place.