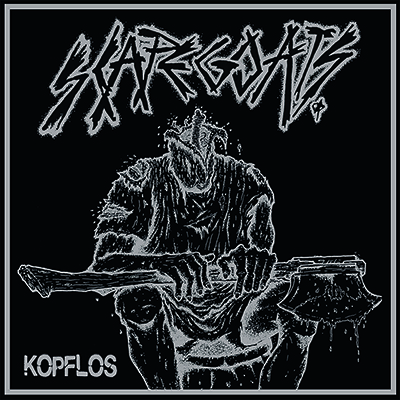 The SCAPEGOATS were a german ultra Hardcore, Punk band, born in the Early Eighties and located in Klausdorf (a smaller city nearby Kiel, Northern Germany), their first releases already came out in the beginning of the Good Old Eighties: the "Pogo Lebt" demo tape (1983) and "Last Attack" demo tape (1984) was followed by the "Kopflos" 7" (1986, re-released here), they also were well known worldwide from many compilation tapes and the great german "Let´s Have More Fun" compilation LP. SCAPEGOATS were the german answer to KAAOS, RATTUS, SVART FRAMTID, CRUDE SS and MOB 47, harsh, fast and aggressive Hardcore with fucked up vocals.
On this official re-release you will get the five songs from the 7" EP and additional seven songs taken from a studio recording done november 1984 in Marbostel, Germany.
The "Kopflos" EP already has been released on 7" format in the year 1986, the first ever pressing has been unleashed upon mankind by the (west-) german label DISSONANCE RECORDS.
One-Sided 12" with screen print on the B-Side, altogether 500 copies of the final version) will be pressed, they are all housed in a standard LP pocket cover (lyrics printed on the back of the cover) and will come with Din A3 poster.