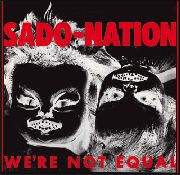 BACK IN STOCK!!! Formed in 1978 by David Corboy, senior citizen in Northwest punk rock, (who had been playing in bands since 1963!), Portland's KBD punk legends SADO-NATION released their groundbreaking debut EP in 1980, and switched right after to faster and tighter hc punk mostly thanks to the addition of the singer Mish Bondage to the band. Voted best female vocalist by Flipside in 1984, Mish's frightening stage presence and meaningful lyrics, gave Corboy's compositions a new twist, which resulted in one of the most hidden treasures of American '80s hc punk history. SADO-NATION's first LP, originally released on the Brainstem label in 1982, is now legitimately reissued on vinyl for the first time in 30 years. After years of struggle and despair, hundreds of punk record collections can now be easily completed.