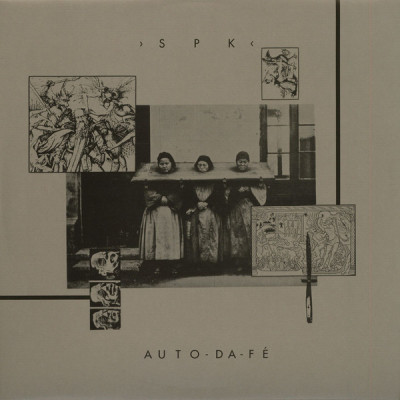 Auto Da Fe is a collection of some of SPK's singles from between 1978 and 1979. What is most noticeable about this work, is how their sound evolved massively, in such a small period of time. The first five tracks, from '78 and '79, are basically a scratchy thrashy punk sound, augmented by synthesizers and samples. Guitars grind, electronics screech, and metal is most thoroughly bashed. Highlight of these early works, and indeed the album, is the deranged "Slogun". The intro to the song, a demented echoing clucking and quacking, leads into a pulverising mechanical grind. Synthesizers screech and buzz in horrific fashion, as the lines "Kill kill kill for inner peace, bomb bomb bomb for mental health, therapy through violence" are barked out maniacally. Surely a candidate for most extreme song of the late 70s and early 80s. Of all the bands who created a racket during this period, did any of them manage such a noise, with such a focussed, structured track? I somehow doubt it.
The next three tracks come from 1981, and a new more synth-oriented sound has been discovered. "Metal Field" and "Walking on Dead Steps", ever-so-slightly catchy, sounds like Violator era Depeche Mode gone wrong, creepy, with militaristic overtones. "A Heart that Breaks (In No Time Or Place)", is the stand-out here, a minimalistic, almost EBM track, as an empassioned female voice narrates the amazingly bitter lyrics, while seemingly random percussion bashes quietly in the background.
The final three tracks date from 1982. On these tracks, a kind of shamanic quality has overcome the music, a tribal, mystical sound has come into effect. Synth-drum beats hold the songs together, as metallic-percussion inject the tracks with a hint of randomness and confusion. Vocals are no longer shouted, but delivered calmly, and the synth backing is created through drones, rather than beeps and stabs.
Every single one of these tracks is of the highest quality. Of all the 'industrial' bands, few can lay claim to having the variety, experimental attitude, and sheer quality of SPK.