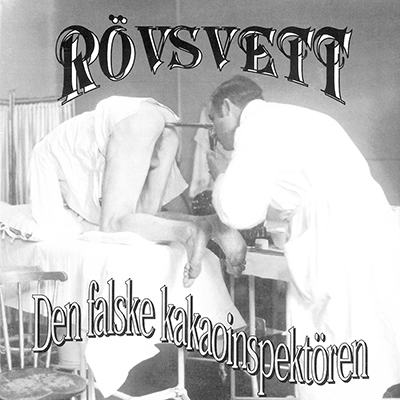 "Den Falske Kakaoinspektören" is the first full album of the long-lasting swedish Hardcore band RÖVSVETT, which already released the split LP with PLAGUE, three full EP´s and the split EP with RAPED TEENAGERS prior to this masterpiece. All fifteen songs were recording during august, september 1994 in the Studio Ljudhuset, Tranås, Sweden and fans of the band know what to expect: fast, belligerent Hardcore, Punk influenced by Eighties US Hardcore (RÖVSVETT never has been the typical swedish Crust, Käng band) with the typical raspy vocals of their frontman Jerker. "Den Falske Kakaoinspektören" delivers fourteen Hardcore smashers, as powerful, crushing as their fans need plus a funny but brutal as fuck Techno song. This album has never been pressed on vinyl, so don´t miss this good looking and good sounding piece of plastic.
BIRDNEST RECORDS from Sweden did the first (CD only) pressing in the year 1994.
Co-production with BIRDNEST RECORDS, Sweden and the band: Standard edition of 400 copies on Black vinyl, this LP will come in orginal artwork (of course with updated info) and with extra lyric sheet. All songs got a new mix and sound way better than on the original CD version.