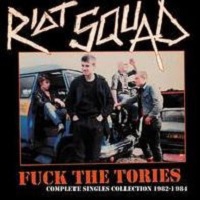 BACK IN STOCK!!! Complete singles collection from 1982 to 1984 for this Eighties Oi!/combat street punk band from Mansfield, UK.

Mike Commaford, owner of Rondelet Records, picked up on the band in early '82 and their debut release for the label was the "Fuck The Tories" / "We Are Riot Squad" / "Civil Destruction" EP (Round 23) which was produced by Mike Stone of Discharge/GBH fame.
A second EP for Rondelet, "Riots In The City" / "Religion Doesn't Mean A Thing" / "Why Should We" (Round 25) came out towards the end of the year and featured new guitarist Staz who'd replaced Nello.
Vocalist Dunk had by this time set up Rot Records and though he had initially released tapes he decided to venture into the world of vinyl, the obvious first choice to release records by Riot Squad. However, combining both label and band duties proved harder and harder to do so he quit the group and was replaced by a member of the band's road crew, Lee.
Lee's vinyl debut with the band came on early '83's "Don't Be Denied" EP which featured "Lost Cause"/ "Suspicion" / "Unite & Fight" and "Police Power" which became the band's third Independent Chart hit.
Their second Rot release was the "I'm OK - Fuck You" EP which included "Society's Fodder" / "Friday Night Hero" and "In The Future".
The single also saw Wayne moving to guitar and bassist Chedd joining the group though by the time of their last release, "No Solutions" / "Government Schemes" the band had acquired a new drummer called Gerry.