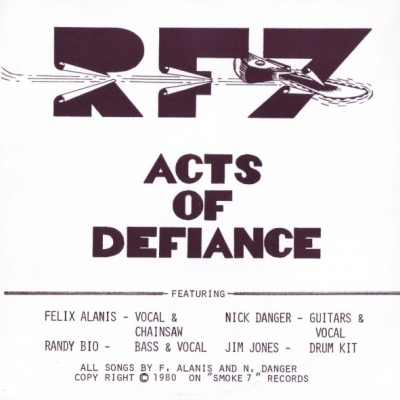 Originally issued in 1980!
RF7 is a long-lived, southern California punk rock band that began in 1979 by Felix Alanis and small time child star of the Sheriff John show Nick Lamagna.
Felix also began the record label Smoke Seven Records and signed his band and many others who were ignored by the big labels then, such as Redd Kross, Bad Religion, JFA, Crank Shaft, Circle One, Sin 34, Youth Gone Mad, etc. On Acts Of Defiance we are treated to a band still exhibiting many of their former rock influences and while the band would never completely lose those influences it is not the fast raging hardcore with wild out of control guitar leads displayed on the Fall In LP.
Includes "Chainsaw Love Affair" first RF7 track played on Rodney on the Rock in 1980.