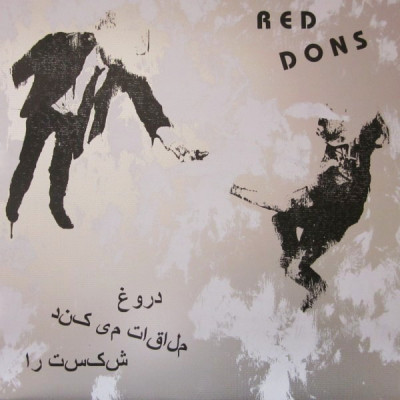 The '00s or whatever you wanna call the last decade is over, and the results are in. Honorable independent publications and the ever growing "blogosphere" outdid themselves with Top 5, Top 10, and Top 100 lists of records that were issued in the last ten years. A common find among these lists was the seminal SO WHAT'S LEFT NOW? LP by Portland, Oregon's THE OBSERVERS released on VINYL WARNING in 2004. The dawn of a new decade is upon us and Doug Burns (Lead singer/songwriter/artist of THE OBSERVERS) has a new band, the RED DONS, featuring Daniel Hajji Husayn, Richard Joachim Preinesberger, and a rotating cast of characters including Justin Maurer (Clorox Girls), Will Kinser (Born/Dead), Zack Brooks (Soda Pop Kids), and Andy Foote (The Physical Challenge). Named after a group of Cambridge professors that operated as spies for the Soviet Union in WW2, the RED DONS continue where the OBSERVERS left off with added elements of Arabic themes in both the artwork and sound. After the much lauded release of their debut album and successfully touring the US, Canada, Europe, and Brazil, the RED DONS entered a Portland studio to record ten new tracks. On this new album FAKE MEETS FAILURE (DERANGED RECORDS / TAKEN BY SURPRISE RECORDS), the band successfully develops their unique style even further. Coded lyrics about vagabond characters moving back and forth between the lines of the current climate of fear and suspicion that has been brought upon the USA by the war on terror. Again, consistent songwriting and a great production make this record stand out among the current competition. Combining TSOL-like vocals, SoCal punk rage, and the defiant melancholy of Pacific Northwesterners like the WIPERS this powerful release rises above the stack of contemporaries that take on the early 80s punk sound. No retro fashion hype, no flavor of the month. When this year turns, be sure to find this LP in the leading spots of Top 5, Top 10 and Top 100 lists of 2010. Though members are now scattered across the globe, the RED DONS will tour the USA in July 2010 and set sail for Europe in the spring of 2010. So What's Left Now? A hell of an aftermath to follow...one hell of a followup record, and one great, fierce force of a touring machine known as RED DONS.