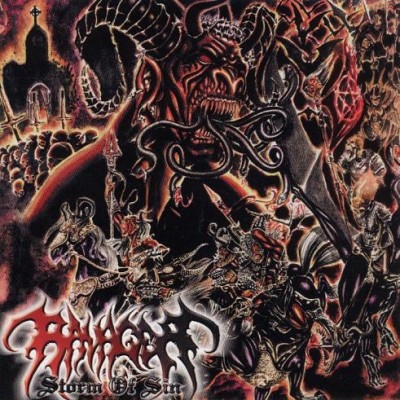 Remember LIERS IN WAIT? Well, if you do love this sadly defunct cult band, I have certainly something of interest for you here. RAVAGER is the new incarnation of the Mexican band DOMAIN who where responsible for a split CD with another band from Mexico (I think) not so long ago. So "Storm Of Sin" is the real first RAVAGER offering, and I can tell you it shreds badly! The band took what DIABOLIC, ABHORRENCE and KRISIUN do best and made it evolve one step further towards complete insanity. As soon as you push the "play" button, you are engulfed in a deathstorm it is impossible to escape from, and be sure I pondered my words with great care before typing them (because I think some terms are used too loosely these days, and so they lose all their impact.) I must admit that all the tracks tend to sound the same, but who cares? Only the result counts and I can assure you will spend a great exhilarating time listening to this album. The great quality of the production (handled by Juan "Punchy" Gonzalez, for sure the hot producer for this kind of release these days) adds to the overall deadly effect "Storm of Sin" produces, so you understand we have a winner here. Each of the songs shows what I call a "whirlwind structure", this explaining why I likened RAVAGER to LIERS IN WAIT above and even the guitarsound made me think of the one found on "Spiritually Uncontrolled Art", the seminal and unfortunately sole offering by the Swedish lunatics. The RAVAGER line-up status seems uncertain to me, as I read on the Osmose website that Antimo from DISGORGE laid down the vocal parts for the album, and I don't know if he will stay with the band in the future. But what I am sure of though is that RAVAGER can be counted as a very promising band from now on. So, BUY this RAVAGING release!
Edouard Vergriete-voices from the darkside mag.