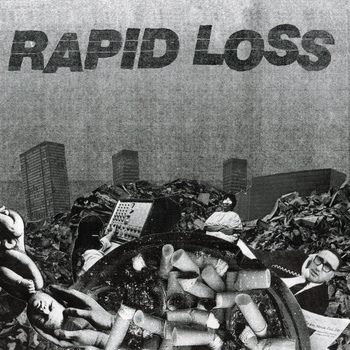 I reckon this is pretty ace.
Seven of the tracks are fast, brutal, upper-tier hardcore that go beyond most traditional standards of punishment.
Comparisons might include Manpig, Stations, BGK or a bulked-up and incredulous SSD, with everything barked, grinding and heavy enough around the shoulders that you'd definitely think twice about spilling their pint and then laughing in their face about the silly thing you just did.
The singer barely seems to spit the words out fast enough, and oftentimes the band follows suit as though they're all but tripping over themselves to get all that excess rage out.
After this initial flurry of activity, the whole side b comprises antagonistic pounder 'Death Persuades'.
This goes on. And it goes on. And it goes on.
But in the best possible way: a horrible, gluey, Flipper-like lurch that lasts for 14 minutes and sounds like the band are trying to headbutt their way through a brick wall just so they can get to you and kick you in your stupid bloody face.
It's a right treat, and makes it kinda tough to decide just which side you might like more.