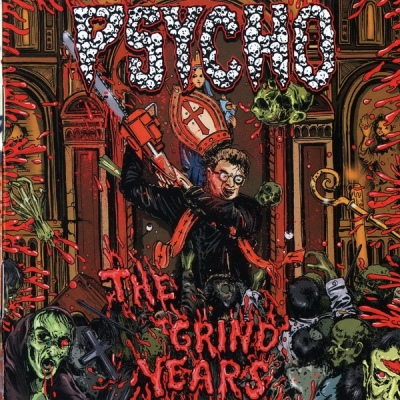 Legendary grind/punk band PSYCHO out of Boston, Massachusetts offers their third installment of discography.
"The Grind Years" features 52 tracks dating from 1990 to 1994 and demonstrates a more brutal face of the band that has evolved from punk/thrash to grind/death.
This treasure trove consists of the "Mass Consumption" 7” and the "Shrunken" 7”; splits with Anal Cunt, Meat Shits, Agathocles, Rot, Satan’s Warrior, Nasum, and Blood; and compilation tracks from Bllleeeaaauuurrrggghhh, Apocalyptic Convulsions, and Audio Espionage.
More than that, there are five video bonus songs recorded live on PSYCHO’s 1992 tour in Australia.
PSYCHO plays brutal, raw, and fierce grind for fans of S.O.B., NASUM, HERESY, C.S.S.O., AGATHOCLES, UNSEEN TERROR, and ROT.
This is a must have for all fans of old good grind with punk and metal influences.