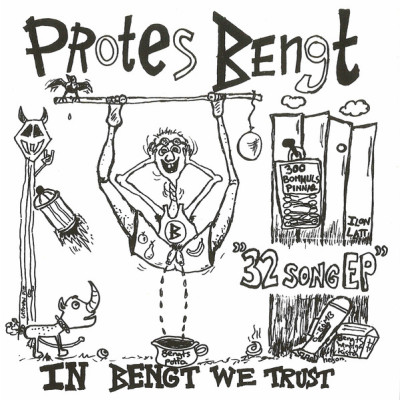 BACK IN STOCK!!! Repress of this classic Swedish 7“ originally released via Röj records in 1985. Protes Bengt was a blast off hardcore project by Åke from Mob 47 and Per Thunell from Filthy Christians and was basically Mob 47 with Per on vocals. The band was mainly formed to break some guys who did a tape with loads of songs. Protes Bengt never rehearsed but made two recordings. The first recording contains 74 "songs" of which 32 were released as this "In Bengt We Trust" EP. Most of the lyrics are really stupid but some have serious contents. The second recording was a 12-track demo called "Bengt E Sänkt", the style had change to more one beat hardcore like Heresy, D.R.I, Lärm. The 7" comes in a nice screen printed cardboard.