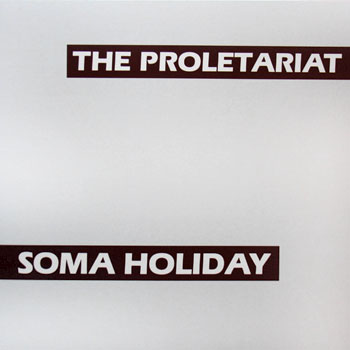 Calling the Proletariat a hardcore band is a big stretch, at least if you're talking about hardcore as a musical style. While the other Boston bands were defining a local sound based on speed and brutality, the Proletariat were melding the styles of their heroes the Sex Pistols and Gang of Four to create sparse, edgy, but always hyper-aggressive melodic punk rock. Although they had no experience when they formed in southeastern Massachusettes in 1980, by 1981 they were already terrorizing New England with obscene Pistols' covers and their own developing tunes. In '81 they put out a 7-song demo tape called "Distortion" which became popular with critics and college DJs. Some of these songs would end up on their first LP, but only after the Proles were introduced to a wider hardcore audience through the seminal compilations "This is Boston, Not L.A." and "Unsafe at Any Speed" put out by Modern Method. Although lyrically and musically they had little in common with bands like Gang Green and Jerry's Kids, the Proles had the same raging intensity; this was no small feat for a band that never accelerated beyond a driving, mid-tempo dirge. The band came into their own with the release of their first LP, Soma Holiday on the Radiobeat label in 1983. This record contains 18-blasting artpunk anthems that tackle a variety of social issues from an insightful but distanced perspective. Although more direct in their critique than Gang of Four, the Proles never had the blatant agenda of Crass.