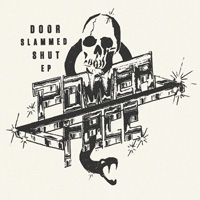 A fresh breath of catchy fucking hardcore from the Clueless Punx camp - with a catchy rock lick up their sleeve...

Stockholm, Sweden’s Power Face have a few records out already (including an LP on Really Fast Records!!!), but this is the first time I’ve heard them. While it’s not so on the nose they sound like a “worship” band, parts of Door Slammed Shut are a dead ringer for peak-era RKL. Like RKL, Power Face sounds kind of metal but they aren’t afraid of major keys, their guitarist and drummer are serious rippers (I love the accents on the ride bell! That’s classic a classic Bomber move…), and their vocalist sounds raspy and snotty but can still lead an anthemic sing-along. This reminds me of the catchy and ripping punk that No Way Records made a name for themselves releasing in the mid-2000s, and if you’re still spinning your Government Warning records, I think you’ll get plenty of mileage out of Door Slammed Shut.