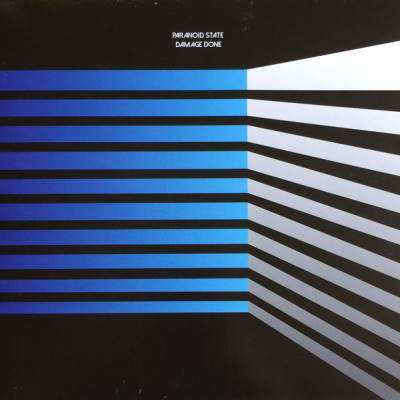 At the beginning of 2014, three hardcore / punk veterans from Utrecht and Amsterdam decided to sound raw and urgent rejuvenation, along the lines of a former Hüsker Dü and the noisy-rocking post-hardcore à la Fugazi. With a bag full of experience, in bands such as Vitamin X, Karel Anker and the Jews and Tense Reaction, Paranoid State rattles and spits out personal frustrations and nagging social issues / social trends from its system.
Compared to the follow-up, the debut album was more in the basic punk. To be heard again in the many stiffly paced tempos and the rude proclamation of singing. In addition to the aforementioned influences of Hüsker Dü and a Fugazi, but much more hanging in the primary hardcore punk. Somewhere in between Discharge and old Cro-Mags, to mention some more illustrious names (albeit without the thrash elements of the latter).
Damage Done is more jumpy than its predecessor. In contrast to the more straightforward sounding debut, the punk-rocking post-hardcore moves on this album with a certain dose of control. Bouncing turmoil continues to be thought through in many of the songs. With transverse turning points and buzzing rhythms. Hear The Call, You Lost and Shut Me Out, are all catchy and striking 'signs' of Paranoid State's stubbornly abrasive hardcore, in which dirty grooves and underlying melody further support the song structures. While tracks like Where Do We Go and Drag Yourself Down radiate more hardcore punk, with those bright gears.
The second half of the plate tightens the punk belt even more tightly. River and Paralyzed thunder through so intensely and poisonously, but once again do not forget the sophisticated, refined guitar melodies. Where solid rocking patterns and some sharp jumps in End Of The Line and Paranoid State offer a counterbalance to the peaking bites. All slightly flatter, with a little less exciting growth than in the first album part. The six-minute closing album title track - the other tracks clock around two or three minutes each - also fails. Towards the end, this mid-tempo sleper is still doing fine with great scratching guitar scales.
Compared to his debut, Paranoid State is undoubtedly showing creative growth on Damage Done. Without luckily taking away his raw and heady no nonsense character - also nicely caught in the loose and dirty production - the album sounds a lot more varied and catchy than the first one. The post-hardcore is extended further. And together with the subtle melodies, it gives more venom and yes, even flair to the basics of rough hardcore punk / punk rock. In addition, the regular pointed bass runs of Gideon Ferrero still play a nice, striking role.
You may not be able to grab Damage Done completely until the end, but the full-length player has plenty of potential in the house that makes you pleasant to listen. A catchy, energetic album with a nice dash of stubborn swagger and therefore definitely worth a listen.