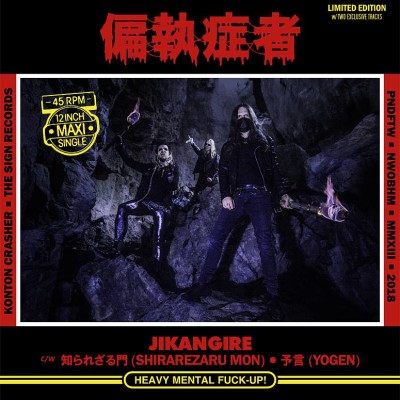 Three-song 12” single teasing this Swedish band’s upcoming full-length. The a-side track is from the album and the two songs on the b-side are exclusive to this release. If these three tracks are any indication, we can expect that their upcoming album, Heavy Mental Fuck-Up!, will be different from their first one, Satyagraha. On that record Paranoid seemed fascinated with the swirling layers of feedback and dramatic dynamic shifts of Disclose’s later records, but these three tracks find them moving toward a more straightforward hybrid of anthemic crust and Burning Spirits-style Japanese hardcore. Speaking of which, “Jikangire” is more or less a reworking of the song “Mirror” by Death Side. Paranoid have borrowed rather famous riffs before (one track on their Praise No Deity EP cribbed from “Into Crypts of Rays” by Celtic Frost) and their many cover songs make no secret of their indebtedness to their influences. That’s far from uncommon in today’s punk scene, but “Jikangire” borrows more flagrantly than most. The two tracks on the b-side are in a similar vein, with a heavy, metallic crust sound that reminds me of Doom or State of Fear. These tracks are cool, but fans should know they’re rather different from the old stuff. Still, I’m looking forward to hearing the full articulation of this new direction on the upcoming album. Limited Edition of 500 pressed. Black Vinyl in discobag. Vinyl EP recorded, mixed and mastered my Kenko/Communicahos