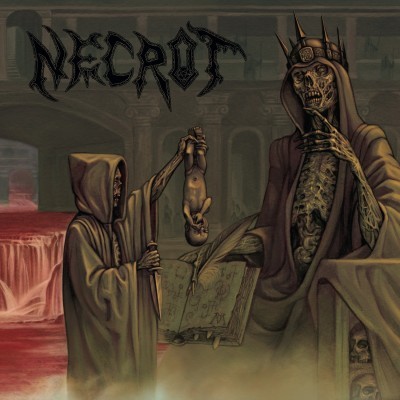 Necrot is a veteran band that has not had a full-length release in six years. Comprised of former members of bands Acephalix, Vastum, and Atrament amongst others, Necrot proudly wear their influences and seek to boldly take the style where few bands dare follow.
Necrot seemingly pay homage to old Bolt Thrower and Autopsy. Their latest album Blood Offerings transcends tribute and aligns them with the greats of the niche. There are terrific hooks in each song on Blood Offerings, and it’s likely that any metal fan will just pick this up, play it, and headbang along to the quality music on tap. I haven’t heard a death metal album stacked with as many great riffs in a while.
Bolt Thrower played a simple, but highly aesthetic style of death metal. Necrot refreshes the template with a slew of quality, catchy riffs and accessible song structure that sounds quite original. Admittedly, I wasn’t familiar with the band’s music before I heard Blood Offerings, and this is undoubtedly one of the better death metal albums I’ve heard this year. If their other albums fail to impress me as this album does, then Necrot has got one masterpiece in the bag at the very least. I’ve heard other writers claim that Necrot has always been a good band. Indeed, Blood Offerings fortifies the assertion. I’m about to go backwards in time and rediscover the band’s older material.
Simple but catchy, the groove and chugging prowess exemplified by the rhythm guitar sees transition after transition of stellar riffs. The drums keep time and the great sound engineering on the toms reminds me of a drum session in an amphitheater – they echo to the sound of good acoustics, and the production leaves them audible in the mix to the band’s great benefit.
The guitars are in front of the mix – gritty, fuzzy and downtuned like Finnish death metal guitar in the heyday of Finnish death metal. There’s not a bad track in Necrot’s body of work on Blood Offerings. The band makes an uncharacteristic song choice to start the album, opting for a slow-to-mid-tempo track that could have followed a more ferocious number, but the band has the luxury of deciding between equally good songs to begin with, and most fans won’t even notice how Blood Offerings can be altered to make the music more enjoyable. Most songs deliver the goods without overplaying riffs that might sound borrowed. In fact, the riffs here are a fresh blood spattering of death metal exquisiteness that begs to be heard over and over. I listened to Necrot’s Blood Offerings for hours at a time.
There’s no need to elaborate just what goes on in each song. Just know that even Bolt Thrower could pay homage to Necrot in the wake of the latter’s highly-substantive Blood Offerings release. Bolt Thrower is largely untouchable up and down their impressive history of releases, and if Necrot just wanted to play music even remotely similar in quality to that of Bolt Thrower, they’ve just done it. No longer tributary in quality, the band just recorded a modern-day classic. Pick this up in whatever media available and cherish the style that made bands like Bolt Thrower legendary in its own time. This is a can’t miss!