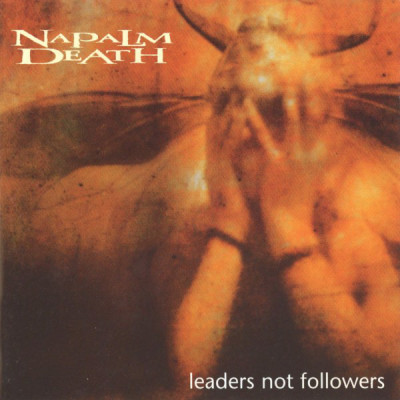 The kings of grind have a proven track record of solid EP's, from 1989's Mentally Murdered to 1997's Breed to Breathe. Leaders Not Followers continues that tradition in stellar fashion. While many bands release EP's consisting of B-side material or a handful of live tracks, Napalm offers six cover songs that showcase their musical influences on one hand and their unrivaled intensity on the other. They fly through these tracks in just under twenty minutes, crushing your ears throughout. Three of these covers show up on their subsequent Punishment in Capitals live album; Politicians, a blistering hardcore song by Raw Power; Back From the Dead, a demo-era song from Death; and the Napalm staple Nazi Punks **** Off by Dead Kennedys (re-recorded from the previous Napalm EP of the same name).
Barney sounds crisp, clear, and vicious, and the band shows hints of turning back to a heavier direction from the Fear Emptiness Despair-through-Words From the Exit Wound albums. That's exactly what they would do on the next cd, Enemy of the Music Business, but as of this EP, released in 1999, they hadn't yet made that grindcore comeback. After this foray into cover songs, they released a second, full-length installment of covers in 2004. This first one can be picked up for under five bucks brand new, which I think makes it entirely worth it for a fan of the band. The songs retain the flavor of the originals, but they still sound unmistakably like Napalm Death, and they put their usual 100% effort into the recordings. Intense band, powerful EP; highly recommended.