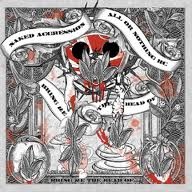 NAKED AGGRESSION / ALL OR NOTHING H.C.

The name NAKED AGGRESSION probably rings a bell or two in all you punk rock fans. The band from Los Angeles was formed as a music protest and manifestation against the first Persian Gulf War. Some twenty years and another Gulf war later the band continue with their direct straight-in-the-face political punk rock fronted by the charismatic Kirsten Patches. Her energy gives you faith in your own strength in the ongoing fight against social inequalities, hegemony, corruption and conservative and religious bigots. Their a bit younger counterpart ALL OR NOTHING H.C.a has been conquering the scene for the last ten years and equals their friends from Naked Aggression in terms of power on stage and social engagement. Coming from California, the band plays energetic hardcore punk accompanied by the strong vocals of Renae Bryant. In their music they don’t hesitate to deal with social and political problems affecting us all.