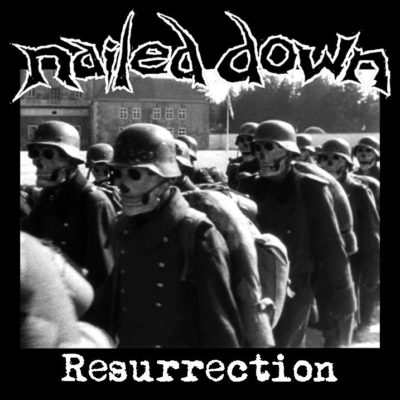 After years in the warehouse we got the complete pressing from the never released triple 7" from vicious Australian head-grinders NAILED DOWN. Sixteen studio-recorded tracks of ultra-barbaric hardcore destruction. Previous releases on Profane Existence (Far East), Six Weeks, Spiral Objective, Homegrown, Power It Up, and more. The artwork is complete different to the CD release on First blood Family Records years ago. Nailed Down from down under have been going for quite some time now, and this is their newest release. They lay down the law with some absolutely unrelenting and pummeling hardcore, taking heavy influences from early '80s US hardcore, particularly Boston. In fact, they cover Negative FX's "Nuclear Fear". Although Nailed Down takes strong influences from early '80s Boston hardcore, it's not exactly in that style. The catchiness and hooks of those bands are substituted with blasting brutality, sort of like the way in which Infest was influenced by Boston hardcore. The noticeable exception being track 13, "You Tell Me" which is the catchiest song on the album. Either way, a really good album all around, and a good place to start if you are looking to check these guys out.(ripping thrash fanzine)